Showing posts from March, 2013
Show all

Signs of Spring and the Beartooth Highway 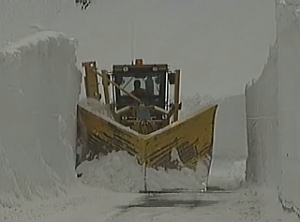 The bears are out of their dens in Yellowstone. The Yellowstone park is starting to clear the roads inside of the park. They say that they will be delayed somewhat because of the US Feds cutting their budget. The state of Montana clears the Beartooth highway outside of the park in Montana but Wyoming does not clear their part of the highway. The Beartooth highway is spectacular.


This from the website, beartoothhighway.com :
First referred to as "the most beautiful drive in America", by Charles Kuralt,On the Roadtelevision correspondent, the Highway is a destination in its own right. It is the highest elevation paved highway in the Northern Rocky Mountainsopen to travelers seasonally from May/June to October.
The Beartooth Highway is a 68-mile travel corridor, beginning (at its eastern most terminus), just south of Red Lodge, Montana at an elevation of 6400 feet and ending (at its western most terminus) near the Northeast Entrance to Yellowstone National Park and Cooke City an…
Read more 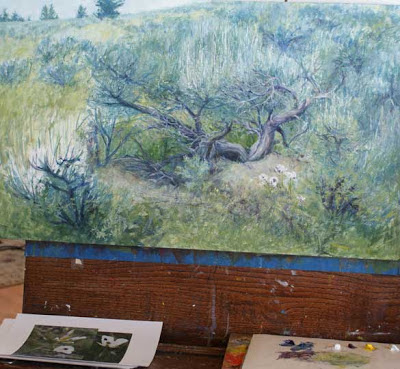 This painting I am working on now is of a scene a bit further up the mountain from us. As you come through the woods, the landscape opens onto a field of sage brush. Here and there are a few scattered pine trees. When you reach the top of the ridge, you look west with a panoramic view of the Pioneer Mountain range. Cresting over the ridge below is a deep valley.

The sage bushes themselves are a twisted mass of weathered branches. The grays, blues and greens make for an interesting color scheme. I am punctuating the center of interest with some warm contrasting grays.